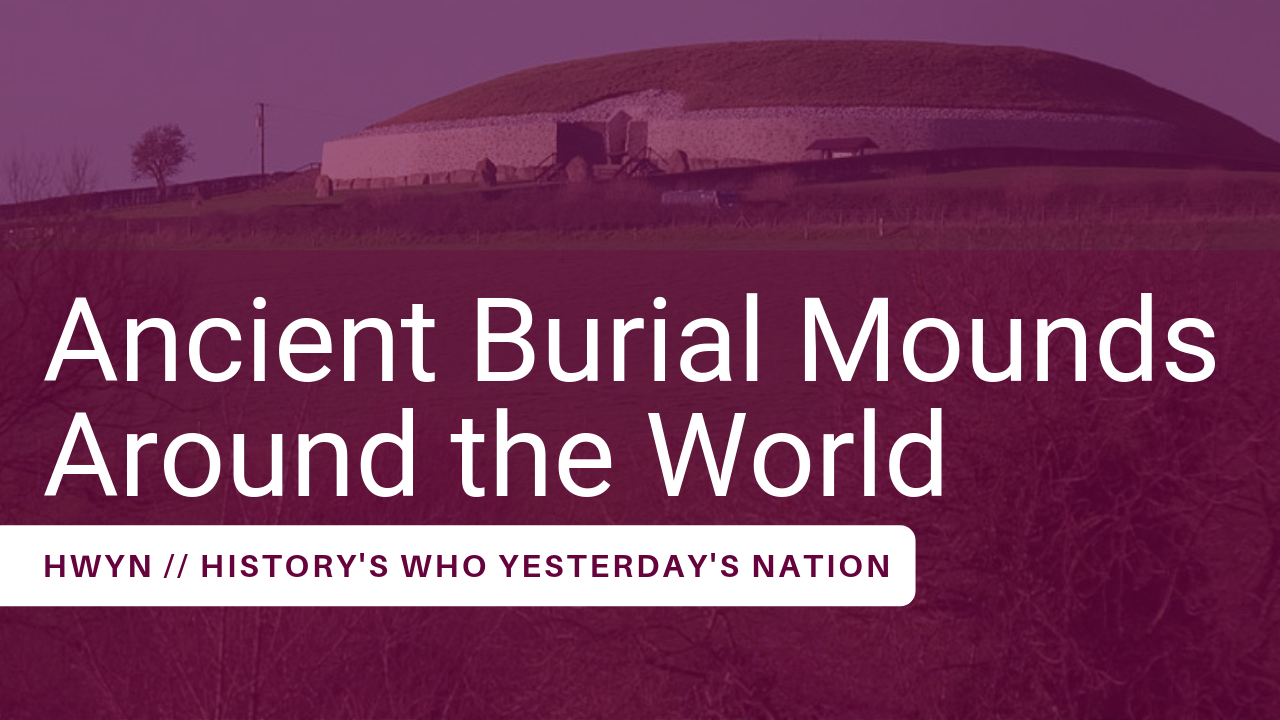 Humans have been conducting elaborate rituals following the death of loved ones since prehistoric times. While there are many methods of funerary rites, one specific style of burials has been found in Ancient cultures all around the world, from the Japanese Islands to North America. Burial mounds provide a way to commemorate the lives of individuals that are significant to a community, without disrupting the flow of nature which surrounds it. They have been called by many names over the centuries including tumulus, barrow, cairn and kurgan. No matter what term is preferred, their existence can offer a lot of insight into the culture and religious beliefs of ancient peoples across the globe.

The Kofun Period of Japan lasted from 300 to 538 AD, and was named so after the Kofun mounds found throughout Japan. The largest of these mounds is the Daisen Kofun, which was built for Emperor Nintoku in the late 4th century. The enormous complex took more than 20 years to complete, and it stretches across an astounding 110 acres and is one of several mounds located in modern day Sakai in Osaka Japan.

China – The Mausoleum of Emperor Qin

Though only recently rediscovered, the Mausoleum of Emperor Qin in China is perhaps one of the most well-known burial mounds. The famous Terracotta warriors were found inside the large complex. The approximately 44-acre mound has only been partially excavated, so there are sure to be many more historical treasures revealed in the future. According to the Ancient Chinese text Records of the Grand Historian, the tomb was built for Emperor Qin in 246 BC after conquering six surrounding states. It was said that it took 700,000 men to excavate and build the mound and that it contained many great treasures including a mechanically controlled mercury river that simulated the Yangtze and Yellow rivers and their tributaries. It took nearly 38 years to complete, and afterwards all the concubines and workers were trapped inside to avoid anyone revealing the secrets of its contents or whereabouts.

Kurgans have been discovered in areas of Eastern Europe and the Caucasus dating as far back as the 4th millennium BC. Various cultures that have practiced kurgan burials include the Scythians, Sarmatians, Huns and Turkic peoples. The area with the highest concentration of mounds in this region can be found near modern day Kazakhstan, Ukraine and along the Don and Volga rivers. A large number of these gravesites have contained the bodies of female warriors, and could belong to the infamous Amazons of legend.

There have been 19 tumuli discovered in the Golan Heights area of Israel. While many of them have not been thoroughly excavated, some have unearthed interesting artifacts such as LMLK seals thought to have been made during the reign of King Hezekiah. So far, only two formal surveys of the sites have been conducted, one by Gabriel Barkay in the early 1980’s and William Foxwell Albright in 1923. If more archeological digs are performed, it could provide insight into the mysterious kings of biblical history.

If you travel to modern day Turkey, you can visit some popular tumuli constructed by Ancient Anatolian civilizations. Bin Tepeler is a Lydian mound located in the Aegean. Its enormous size makes it appear to be more of a mountain than a mound. It measures nearly a hundred acres across and 226 feet high and is rumored to be the resting place of the Lydian king Alyattes who reigned from 619 to 560 BC. However, in this one location, there are more than 75 mounds, all which are sure to contain the remains of other famous Lydian rulers like Gyges and Croesus. Other burial sites exist in the region of Gordium, one of which is thought to be the tomb of King Midas, as well as Mount Nemrut, which belongs to the Armenian King Antiochus I who died in 38 BC.

Greece – The Tumuli of Philip II and Alexander IV

Macedonia also has many tumuli, some of them commemorating powerful historical figures like Philip II and Alexander IV, the father and son of Alexander the Great. Other famous Grecian mounds include the site of Agamemnon in Mycenae and the recently excavated Kasta tomb in Amphipolis.

Thousands of Slavic, Illyrian and Thracian tumuli exist throughout Eastern Europe, in Croatia, Bulgaria, Serbia, Hungary and Bosnia. Some were formed as early as the 2nd millennium BC, while others are much more recent. Many burial mounds were also created in western Europe, particularly in Germany, Belgium and France. Examples include tombs of Gallo-Romans and Merovingian royalty.

Scandinavia boasts several mounds. In the Ynglinga Saga written by Snorri Surluson in 1225, he states that Odin himself established a law that required all men be burned on a pyre, and his ashes cast into the sea or buried in the earth. Whatever treasures were burned or buried with them would remain with them in the afterlife. Therefore, men of renown were buried in great mounds so their communities could remember them, and warriors worthy of honor were given a standing stone. In Gamla Uppsala in Sweden, you’ll find three barrows that are said to contain the remains of Thor, Odin and Freyr. Denmark has more than 20,000 mounds and excavations in Norway have discovered multiple large tumuli with Viking ships inside them.

British Islands – Bru na Boinne and the Hill of Tarra

There are also several mounds located in the British Isles. Dozens of barrows exist in Orkney, Yorkshire, Oxfordshire, Sussex and Suffolk. However, two of the most famous tumuli of Britain are in Ireland. Brun na Boinne, or the Boyne valley tombs are in County Meath. The Neolithic mound houses various tombs, henges and standing stones and was built sometime between the 35th and 32nd centuries BC. The site includes almost 2,000 acres, with more than 40 gravesites, most notably the one located at Newgrange. The second mound is the Hill of Tara, and was the designated location where the High Kings of Ireland were coronated. It was said to be constructed by the mythic Tuatha De Danaan before the arrival of the Milesians. Yet, it continued to be used by the Kings of Mide, who also coronated their leaders on the Lia Fail and remained the capital of Ireland until after the death of the last High King Malachy MacMulrooney, who died in 862 AD.

Mound building cultures also existed in North America and can be found in regions near the Ohio River Valley, Great Lakes, Mississippi River and as far south as Louisiana. The creators of these tumuli were the Adena, Hopewell and Calusa cultures, who not only built structures for their dead, but also used the mounds as a flood proof platform for their homes and public gathering spaces. Some of the largest mounds can still be visited today, like the 1,330 foot long Serpent Mound in Southern Ohio and the Monks Mound in Collinsville, Illinois.

Thank you for watching! I hope you liked this video. I’d love haring about any Burial Mound sites you’ve visited, feel free to tell us about it in the comments below. Also, don’t forget to share, subscribe and click the notification bell so you don’t miss future videos.

0 comments on “Ancient Burial Mounds Around the World”