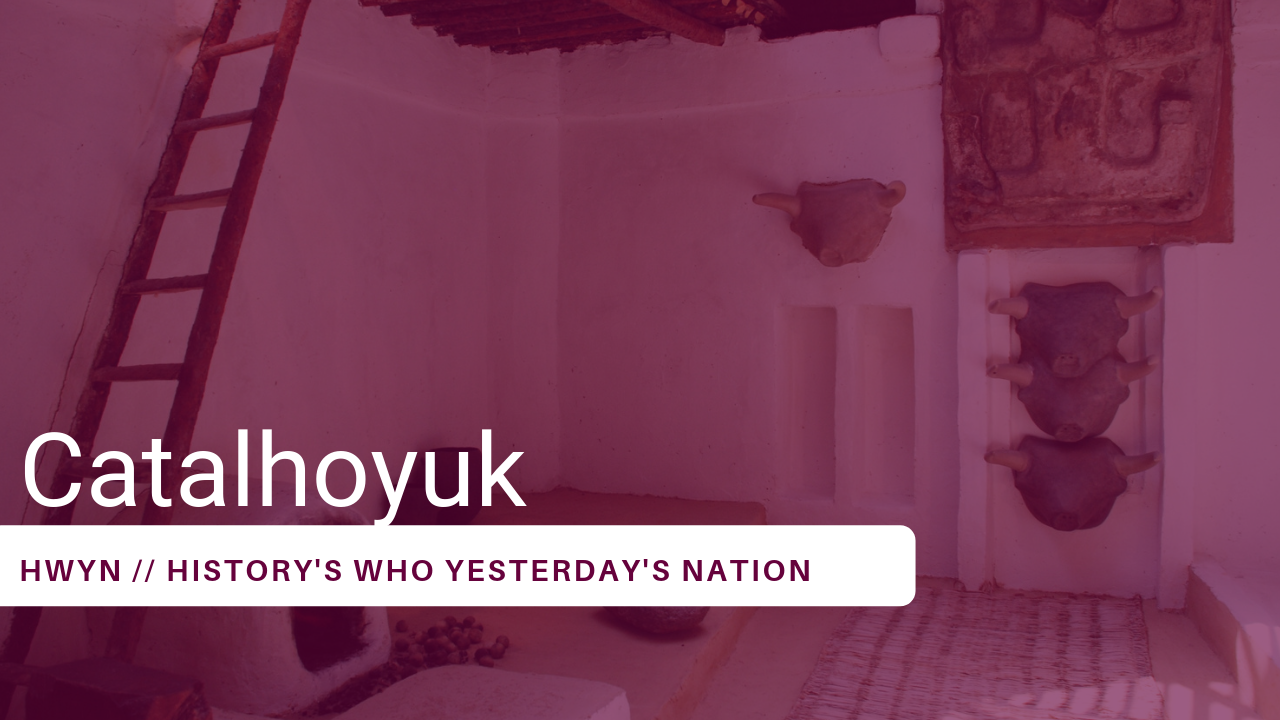 Prehistoric man survived the harsh conditions of the Younger Dryas period by hunting animals and foraging for food. When temperatures began to warm, around 11,000 BC, conditions were ripe for the development of farming. Since the world’s earliest known settlements were constructed before the invention of language, the transition from hunter gatherer societies to settled city life is a mysterious one. However, thanks to the discovery of Catalhoyuk, historians and anthropologists are getting an insightful glimpse into this important time frame of human development.

It’s believed the first visitors to Catalhoyuk arrived sometime before 7500 BC, and continued settling in the area until it was abandoned in 5,700 BC. During the 2,000 year life of this early civilization, many innovative practices were developed including animal husbandry, farming, primitive architecture, pottery and art; all defining characteristics of the Neolithic revolution. Here, humans learned how to domesticate sheep and goats , as well as cultivate peas, barley, wheat and other crops.

At its height, the town occupied more than 30 acres, and housed over 8,000 people. Their homes were all nearly identical, clustered together without streets or ground level public walkways. Instead of the conventional layout, citizens of the community walked from one place to another on the flat rooftops, entering into their personalized space through a hole in the roof. A ladder provided a way for family members and guests to enter and exit, and beneath this ladder and rooftop door was the home’s oven, allowing for quick and easy ventilation of smoke from cooking, heating or handcrafting. The structures were made with mudbricks layered with plaster, similar to adobe buildings. The living spaces were kept meticulously clean, with limited furniture and decorations. The few items that were consistently discovered from room to room include small sculptures of women, men and animals; polished stone mirrors, vessels used for storing food and the plastered heads of bulls protruding from the walls or floor. Elaborate murals are also present in some areas, providing historians with a detailed portrayal of their lifestyle.

The citizens of Catalhoyuk also practiced interesting burial methods. Rather than placing the bodies of deceased loved ones outside of the community, they were placed beneath the floors of the home. In some instances, the head is removed and covered in plaster similar to those found in Jericho and other Neolithic communities in Jordan and Syria, showing a possible connection or kinship to the surrounding cultures of the time.

As is still true in the modern age, city life had both advantages and disadvantages. While a sedentary lifestyle offered the collective group protection from the elements and extra time to develop advanced tools, art and belief systems, the community wasn’t always paradise. Several skulls have been unearthed that exhibit fractures from being struck by small clay balls. This finding provides proof that as the population increased, so too did the need to fight one another for resources during times of trouble or scarcity. In addition to violent behaviors, it seems that Catalhoyuk had occasional periods where the population experienced increased exposure to disease and illness because of their close quarters. Eventually, Catalhoyuk was abandoned altogether. There is no evidence for further development past 5500 BC, yet excavations on the site have not discovered a clear-cut answer as to why the community fell into such decline. Changing climate conditions, the gradual movement of important waterways and depleted soil nutrients may all have contributed to the overall cause of the cities end. Perhaps future discoveries will offer greater insights into the rise and fall of Catalhoyuk, and their contribution to later civilizations of Anatolia, Mesopotamia and the Levant.