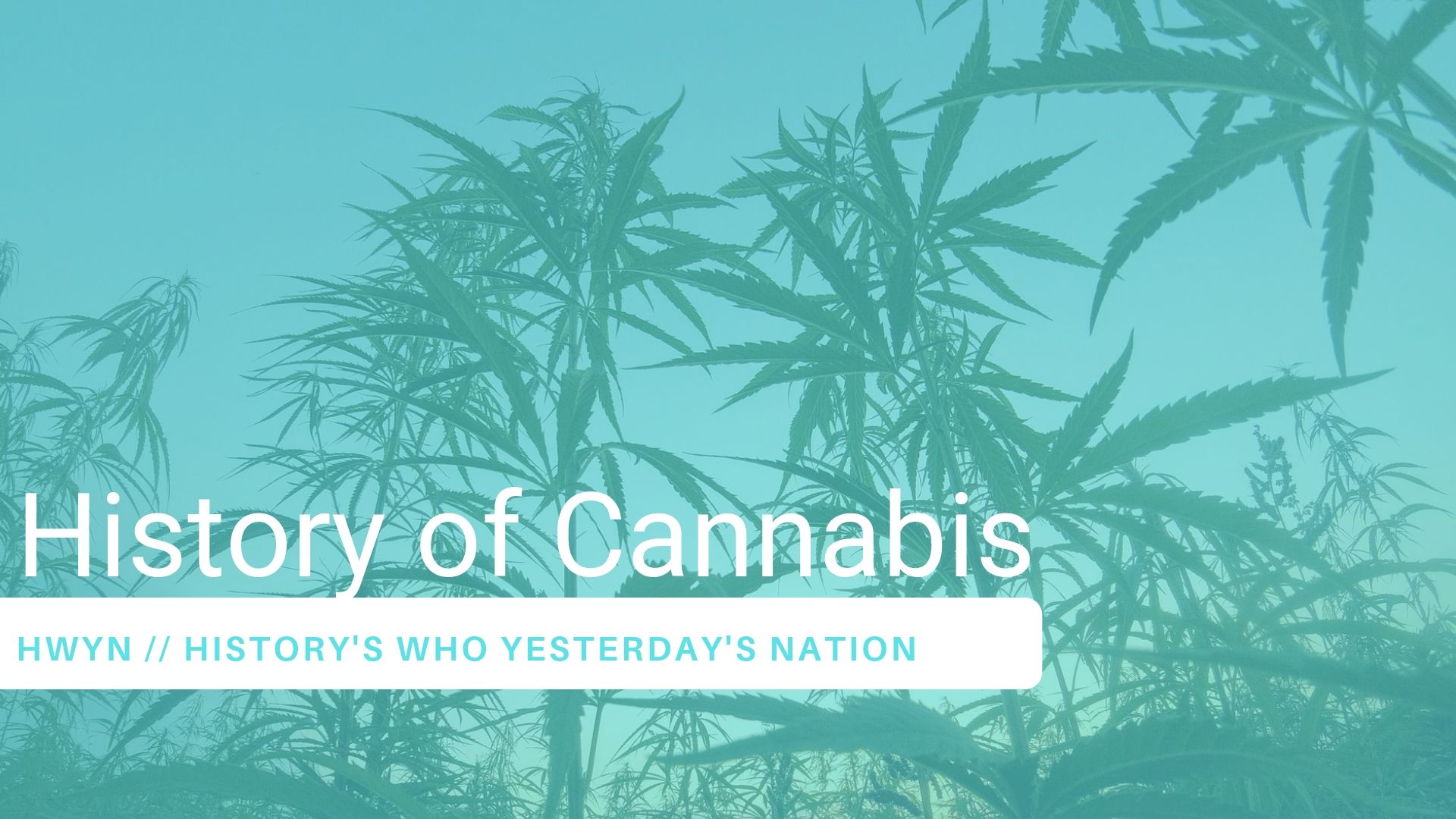 Humanity’s relationship with cannabis is as long as recorded history itself. The ancient Assyrians called it qunubu and used it for ceremonial purposes. Ancient Thracian priests held the title kapnobatai, which means those who “walk in clouds of smoke”, and some even suggest that the recipe for anointing oil given to Moses included the Hebrew word for the “fragrant herb”, kaneh bosm. People in China have cultivated hemp for thousands of years, for both fibers and medicinal use. And, in India, the Hindu Gods are said to have gifted mankind with the art of making Bhang, which is a drink made with spices, milk, ghee and cannabis paste. The traditional drink is still frequently used today throughout Northern India, particularly during the festival of Holi. Another infamous drink of the Gods may have also contained cannibas. In Vedic Sanskrit, it was called Soma, in Avestan, the language of the Zoroastrians, it was pronounced Haoma and was likely prepared and consumed by the Magi and certain tribes of the Saka or Scythians known as Haumavarga or “Drinkers of Hoama”. The scythians were well known for their love of Cannabis. According to Herodotus, a historian who lived in the 5th century BC , “Hemp grows in Scythia: it is very like flax; only that it is a much coarser and taller plant: some grows wild about the country, some is produced by cultivations; the Thracians make garments of it which closely resemble linen…The Scythians, as I said, take some of this hemp-seed, and, creeping under the felt coverings, throw it upon the red-hot stones; immediately it smokes, and gives out such a vapour as no Grecian vapour-bath can exceed; the Scyths, delighted, shout for joy, and this vapour serves them instead of a water bath; for they never by any chance wash their bodies with water.” Herodotus’ story seems to be supported by recent archeological evidence of cannabis found in Scythian and Pazyryk burial sites.

The plant continued to be cultivated and used by Egyptians, Greeks, Romans, Chinese healers, Germanic tribes, Jewish rabbis and the people of the middle east for centuries as attested by numerous religious and medicinal texts written throughout these regions. Eventually, it was brought to the Americas by the European colonists who sowed large fields of hemp. By the 1600s it became a vital crop, as the sails which kept the Spanish, British and French naval fleets quickly moving through the waters of the Atlantic. It was also an excellent fiber for clothing and textiles. Demand for hemp production was so important that King Henry VIII demanded every colonist grow a minimum of one acre of Hemp for every 60 acres they owned. The practice was continued during the reign of Queen Elizabeth who required a fine as penalty for non-compliance.

The founding fathers also understood that Hemp production was essential to the economic success of their new country. In a letter from the early American politician Gouverneur Morris to Thomas Jefferson he writes, “A fact well established in the System of Agriculture is that the best Hemp and the best Tobacco grow on the same Kind of Soil. The former Article is of first Necessity to the Commerce and Marine in other Words to the Wealth and Protection of the Country. The latter never useful and sometimes pernicious derives its Estimation from Caprice, and its Value from the Taxes to which it was formerly exposed…Hemp employs in its rudest State more Labor than Tobacco, but being a Material for Manufactures of various Sorts becomes afterwards the Means of Support to Numbers of People hence it is to be preferred in a populous Country.” Not only did Thomas Jefferson himself grow fields of hemp on his Monticello estate, so did the first American President George Washington. While some believe the creators of the US Constitution only grew Hemp for industrial purposes, the personal agricultural records written by Washington’s own hands explains how he “Began to pull Hemp at the Mill and at Muddy hole – too late for the blossom Hemp by three Weeks or a Month” and that he “Began to separate the Male from the Female hemp…rather too late.” While it’s possible he was cultivating the flowers of his Cannabis sativa plants solely for the purpose of seed production, this could also indicate that he used the plant for medicinal or recreational purposes.

So, how did the early American love affair with Cannabis become so strained in the modern era? There are many political and economic factors that played a role in the eventual prohibition and criminalization of Hemp and Cannabis in the US. During the turn of the 20th century, there were many over the counter medicines which claimed to cure all ailments, and many of them contained high levels of undisclosed narcotics, including Cannabis, Cocaine and Opiates. States began outlawing the sale of quote “poisons” to the general public, and established licensing regulations that allowed for these drugs to be dispensed by physicians only.

By the 1920s and 30s, the invention of the decorticator increased the success of the Hemp industry as a whole, which was a direct threat to powerful businessmen, including Andrew Mellon, William Randolph Hearst and the Du Pont’s. At the time, Mellon was Secretary of the Treasury, and he had invested large sums of money into Du Pont’s nylon business, and Hearst had made substantial investments in the timber industry.

In 1929, Harry Anslinger was named commissioner of the Bureau of Prohibition, and in 1930 created the Federal Bureau of Narcotics, both of which were under the direction of the Treasury Department, which at the time, was led by none other than Andrew Mellon himself. Hearst utilized his most valuable weapon, the media. He owned the powerful newspaper and magazine empire Hearst Communications, which included the San Francisco Daily Examiner, the New York Journal, Cosmopolitan, Good Housekeeping, the Washington Times and countless others across the country. Anslinger and Hearst created propaganda pieces, depicting horrific tales of people who committed violent, heinous crimes while under the influence of cannabis. Out of the more than 200 anecdotes included in Anslinger’s Gore Files series published by Hearst’s newspapers, 198 of them are wrongly attributed to marijuana. Still, the propaganda campaign was extremely successful. By 1937, the team effectively convinced Congress to pass the Marijuana Tax Act. The tax required users and traders of cannabis to pay an annual fee of $24, or more than $600 when adjusted for inflation. If someone sold cannabis to an individual or business who had not paid their fee, the tax jumped to $100 per ounce, equivalent to over $2,000 in modern terms. The new law effectively made growing, manufacturing, selling or buying cannabis and hemp financially impractical.

Enforcement of this law varied over the next few decades, leading to many arrests. In 1969, famous writer and psychologist Timothy Leary was arrested under the marijuana laws of the time. He responded by challenging the constitutionality of the Marijuana Tax Act of 1937 in the Supreme Court. He won the case. The court unanimously declared that the Tax Act was unconstitutional. Congress fought back against the judicial decision by creating the Controlled Substances Act, which was signed into effect by Richard Nixon in 1970.  Since then, the manufacturing, selling and consumption of cannabis and hemp has been heavily regulated, with severe penalties for those who violate the law. Many states have recently began to lift their own cannabis laws, yet it continues to remain illegal on the federal level.

0 comments on “The History of Cannabis”