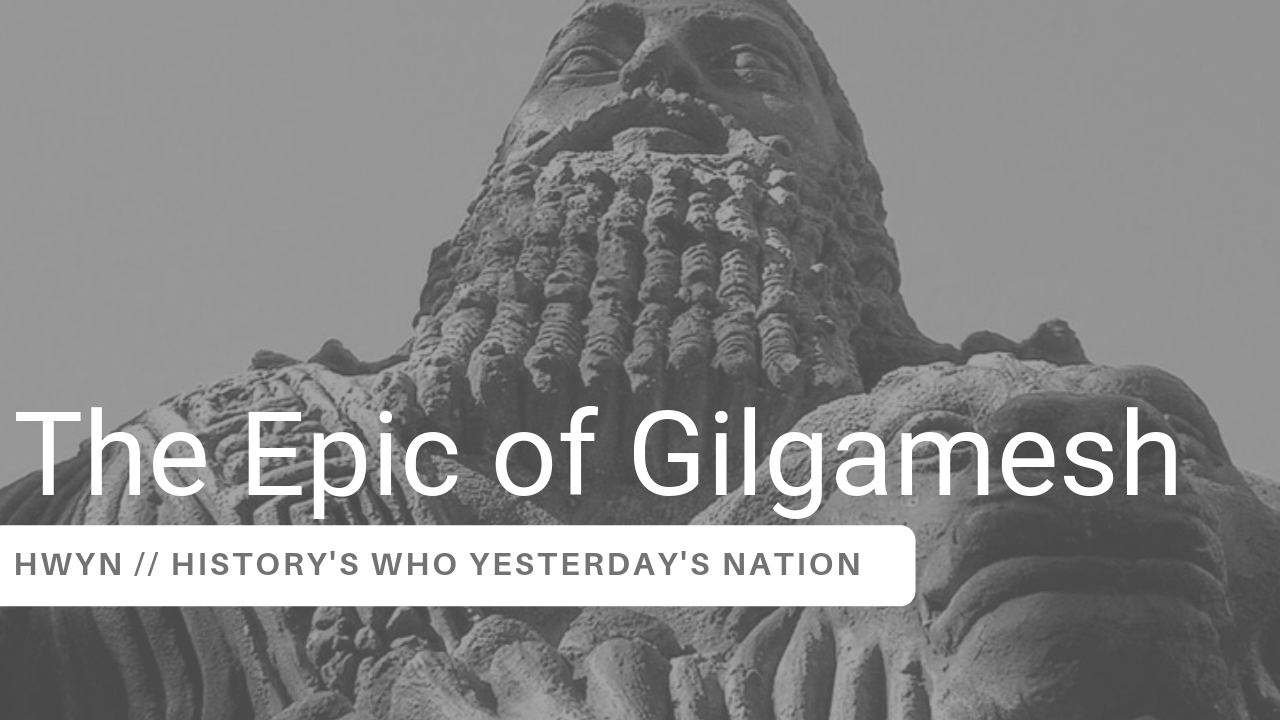 Fans of literature are familiar with the Hero Journey. It’s an arc that forms the backbone of every adventure epic in history. However, not everyone is familiar with just how ancient the archetypal journey truly is. The Epic of Gilgamesh is the oldest known piece of literary work. Its initial version consisted of 5 poems, written in Mesopotamia around 2100 BC. The story evolved over time, and the most complete version of the Epic was carved into clay tablets in the 12th century BC. Despite it’s incredible age, the Epic of Gilgamesh follows the Hero Journey as well, carrying its flawed protagonist through a powerful transformational adventure, showing just how connected humanity is to the idea of the hero and his importance to civilization.

The story begins with a description of Gilgamesh, king of Uruk. He is handsome, and strong and full of energy. He is well admired by his people, but they also fear him. His incredible abilities make him a force which no one dares challenge, and he uses this power, forcing young men to fight with him in the streets. He also sleeps with every bride on her wedding night, claiming rights with her before the husband. Eventually, so many prayers rose up to the heavens from the land of Uruk that the Gods could no longer ignore their clamoring. The mother Goddess Aruru, known as Ninhursag in Sumerian, set about creating a companion for Gilgamesh that would match his endurance and keep him busy. She formed Enkidu from clay, and set him in the wilderness. He grew into adulthood having never met other humans, befriending the animals which gathered at the watering hole. Occasionally, his animal friends would find themselves captured by hunter’s traps, and would release them. One day the hunter came upon the wild man who had been setting his prizes free, and was shocked to see a man living in such a state. He went to Gilgamesh, and told him of the man and asked for permission to bring a temple prostitute Shamhat, in an attempt to lure him from his beastly ways and attract him toward civilization. Shamhat went to the watering hole and waited for Enkidu to appear. When he arrived, she disrobed, and Enkidu was immediately drawn to her. For seven days they made love, and when their time together had ended, the animals rejected him. Everywhere he went, the gazelles which had once been his family now saw him as a human, and fled from him in fear. Shamhat told Enkidu of the splendors of civilized life and convinced him to leave the wilderness. They travel to a shepherds hut where he is first introduced to bread and beer. He washed himself with water and oil and put on clothes. He also helped his new friends by scaring off the lions and wolves which plagued their herds. A few days later, the shepherds are preparing for a wedding feast, and Gilgamesh arrives to take his prize. Enkidu steps before the entrance of the young bride’s chambers and refuses him entry.

Gilgamesh and Enkidu fight in the streets, and for once the fierce king has found someone who challenges his strength and endurance. When the fight is over, both are impressed by the abilities of the other, and they quickly become friends. They set out to make a name for themselves, choosing an impossible quest that will bring them fame throughout the lands. Enlil had placed a terrifying demon named Humbaba in the great cedar forest to deter humans from cutting down the sacred trees. Gilgamesh decided he would go to this forest with his new friend Enkidu, kill Humbaba and build a door for Enlil’s temple. The king has golden axes made for them, weapons that would be capable of destroying Humbaba and they began their adventure. It takes many days for the pair to journey to the cedar forests, and Enkidu has dreams which Gilgamesh interprets as positive omens that ensure their success.

On the way, Gilgamesh visits the temple of Ninsun, his mother, and introduces his friend Enkidu and tells her about their plans. She gives offerings to Shamash, the sun God, and prays for the safe return of her son. Eventually, the two reach the cedar forest and overcome the demon, who pleads for his life. In the end, Enkidu convinces Gilgamesh to kill Humbaba, and they gain their prize of cedar planks for the temple. Gilgamesh returns to Uruk and cleans himself up, replacing his worn-out rags with royal garments. His grand appearance attracts the Goddess Ishtar, who proposes marriage. His reply is a tirade of insults, recounting the ill fate of all of Ishtar’s former lovers. His refusal angers her, and she pleads with Anu to be given the Bull of Heaven so she can destroy him. Anu reluctantly grants her the request, and the Bull of Heaven charges at Gilgamesh. Enkidu joins the fight and together they are able to slay the Bull. The Gods become angry at the death of Humbaba and the Bull of Heaven, fearing that the pair are too powerful. As punishment for their crimes, Enkidu is sentenced to death and immediately falls ill. Distraught at the thought of dying, Enkidu curses the prostitute and the hunter, wishing they had never came to him in the wilderness. Shamash heard his cries and reminded him that if it weren’t for the prostitute and hunter he would never have met his friend Gilgamesh, he would have missed the adventures and memories and would have remained in the wilderness, roaming with the beasts and never living the life of a human. He takes back his curse, and instead bestows great honor on those who brought him along his journey.

After Enkidu dies, Gilgamesh is overcome with grief. He trades his regal robe for lion skins. He lets his hair grow matted and roams the steppe alone, weeping and crying out to the Gods in anger. He becomes afraid of death, saying “I am going to die! Am I not like Enkidu?! Deep sadness penetrates my core, I fear death, and now roam the wilderness.” Now, his quest becomes centered around overcoming death, and he begins a search for the famed Utanapishtim, the great survivor of the Flood who was granted immortality by the Gods. He too wants to become immortal, and wants to learn his secrets.

After much wandering, he locates the home of Utanapishtim and his wife. He recounts the tale of the Flood, explaining how Ea came to him in a dream. Ea showed him that Enlil was angry with mankind and planned to destroy the world with a great flood. Ea told him to spurn all wealth and earthly possessions and instead fill his boat with living things, with his family, animals and enough provisions to feed them during the storm.  After the water began to recede, Enlil discovered that humans had survived and was infuriated. Ea spoke to him on behalf of Utanapishtim, and Enlil gave him his blessing, granting him and his wife immortality like the Gods. Hearing this, Gilgamesh became very excited, and asked how he too could defy death. Utanapishtim advised that he refrain from sleeping for six days and seven nights, in order to convene with the Gods. However, the journey had exhausted him and he fell asleep for seven days. When he awoke, Utanapishtim sent him to the washing place, where he could regain his kingly appearance. After he bathed in water and oil and once again put on royal garments, Utanapishtim’s wife pleaded with her husband to give him something that he could return home with, to show his people there was a reward for his wanderings. Utanapishtim tells him, “I will disclose to you a thing that is hidden, Gilgamesh. There is a plant…like a boxthorn, whose thorns will prick your hand like a rose. If your hands reach that plant you will become a young man again.” So, Gilgamesh is sent on another quest, to look for the plant which resides below the waters of the Apsu. He puts stones on his feet so he could reach the plant beneath the water and pulled it up from the ground. As he was making his way back home, Gilgamesh stopped to rest. While bathing in the water, a snake carried it away. Gilgamesh came out of the waters and noticed that his prize was missing, and returned home to Uruk empty handed.

The Epic of Gilgamesh contains many themes found in later tales, such as the tension between the city dweller and those who live on the wild steppe. One can also see the parallels of the Cain and Able story, as a King and Shephard wrestle one another, and seek the approval of the Gods, and in the end it is the most innocent among them who is struck down. It also highlights the story of the Great flood and man’s ability to survive such an event only with divine intervention. The story also includes a serpent which seizes immortality from the grasp of man. And, portrays universal emotions, like fear of death and the worth of true friendship. It also shows the incredible power of a good story. The tablets had been lost to time for more than 2,000 years. When it was unearthed by archeologists in the 1800’s, the popularity of its words is living proof that the hero and his quests for truth is a timeless tale that is destined to survive in the mind of man.

0 comments on “The Epic of Gilgamesh”