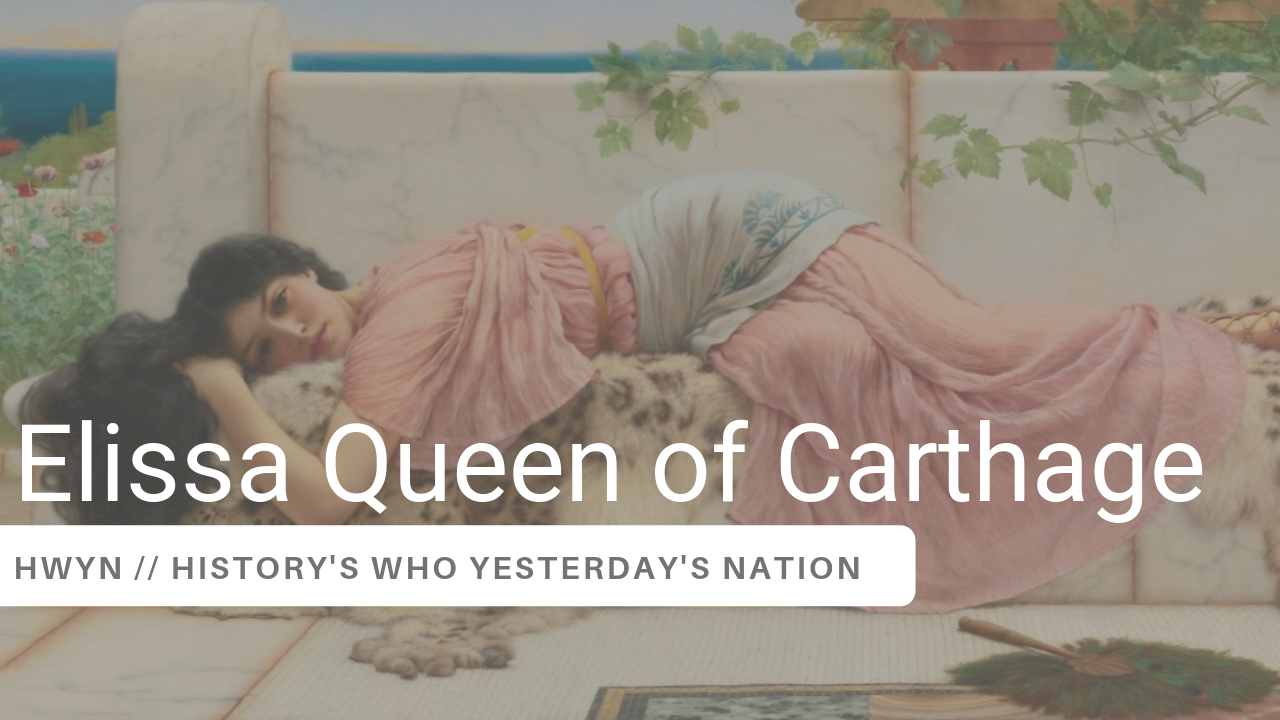 After the death of the Phoenician King Mattan, his kingdom was given over to his son Pygmalion and his daughter Elissa. Pygmalion quickly became a tyrant, a fitting name since he ruled from Tyre, and Elissa was married to her uncle Acerbas, a priest of Hercules who also happened to be the brother of the infamous Queen of Israel, Jezebel. He was by far the wealthiest in the land at the time. Fearing that the King had wicked plans for him, he buried his coffers in a secret location. Elissa and Acerbas grew in popularity, and the people began to show favoritism toward the couple. Pygmalion became enraged with jealousy, afraid that their combined wealth and the admiration of the Phoenicians would eventually cost him his crown. So, he plotted to murder Acerbas. Elissa was awoken by a dream, and knew immediately what her brother had done. In the days following, she pretended to know nothing of the murder, feigning affection for her brother.

She gathered a small group of priests and warriors who were loyal to her late husband, recovered the buried treasures and hopped aboard a Phoenician ship. Pygmalion heard of the deceit and sent a fleet after her. In full view of the Phoenician navy, she dumped hundreds of bags and urns full of gold into the sea while proclaiming that her husband’s wealth belonged only to him. Meanwhile, as the fleet began returning home to inform Pygmalion of the lost treasure, Elissa smiled. She had thrown only bags of sand into the water.

First they ventured to Cyprus. At that time, it was customary for virgins who were of marrying age to visit the temple, waiting for men who would give them coins in exchange for a night of lovemaking. Their actions were seen as a duty to Venus and their payment would serve to help pay for their dowry. When Elissa arrived on the shores of Cyprus, she invited the 80 women who were prostituting themselves to come aboard her ship, which provided potential brides for the Tyrian warriors, senators and priests who were with her. In addition, the Cyprian priests of Jupiter also joined her adventure. Now, having a sufficient population to begin a new settlement, she made her way to the northern coast of Africa. The Phoenicians had already been colonizing the western shores of the Mediterranean for many centuries, and a colony named Utica was nearby. Having seen their success, she thought it was an excellent place to build a new city, Qart Hadasht, or Carthage.

When she arrived to the location where Carthage would be born, her crew was met by Berbers. Their king Iarbas was at first suspicious, unsure whether he should allow them to colonize a new city so close to their own villages. Elissa explained that she would set the boundary of the land by what would fit within a single Ox hide. Iarbas and the Berbers laughed at the proposal, but they agreed. Immediately, she set about cutting the ox hide into a thin, narrow strip which stretched out around a very large territory. The Berbers were astounded and entertained by the trick. Elissa and the new settlers of Phoenicia agreed to pay the Berbers tribute each year in exchange for the land, and within a few short years the foundations of the great Carthaginian empire was laid.

Over time, Iarbas fell in love with Elissa, and demanded that she be wed to him. Queen Elissa knew that her betrothal would force her people to be under the rule of a foreign King, and fearing that future rulers of the Berbers could be a Tyrant like her brother, she refused. Freedom she explained needed to be the most important priority of the Carthaginians. They were to give their lands and wealth up for no Prince, no matter how powerful. Still, he continued to pursue her, and some advisers admitted that it would be wise to accept his proposal, otherwise he might wage war on their newly built city. Elissa knew that marrying Iarbas would be the end of Carthage’s liberty, and that her refusal may cause their deaths, she chose a third option. She built a huge funeral pyre and invited all in the land to come witness the sacrifice that would be made for Carthage. Sacrifice of both animals and humans was a common practice in Phoenician society, so no eyebrows were raised at the thought. Until, Elissa stepped onto the Pyre herself with sword in hand, plunging the blade deep into her belly as she flung herself into the fire.

Many versions of this story have been told over the years. The most famous being the Aeneid by the Roman poet Virgil. In his rendition, after founding Carthage, the Phoenician princess fell in love with a Trojan warrior who fled from his homeland following the war. Aeneis also loved her in return, but the Gods had plans for him to travel to Italy, where the Roman empire would one day emerge. When put to a choice between eternal love or eternal glory, he chose the latter. Devastated, Elissa impaled herself with the sword of Priam and thrust herself in the flames. While this could have been the original timeline of events, there are some discrepancies from other ancient historians. None of the others mention the arrival of the Trojans or Aeneis’ relationship with Elissa. Many writers such as Josephus, Pompeius Trogus and Timaeus do place the date of Carthage’s founding before the birth of Rome, but hundreds of years after the Trojan war. After comparing various historical references and lists of rulers, it seems that Elissa lived sometime in the 9th century BC. The addition of Aeneis may be a politically motivated addition to the original tale. Regardless of the timeline, the people of Carthage continued to revere and even worship Elissa as a figure which represented liberty and freedom.

0 comments on “Elissa and the Founding of the Carthaginian Empire”