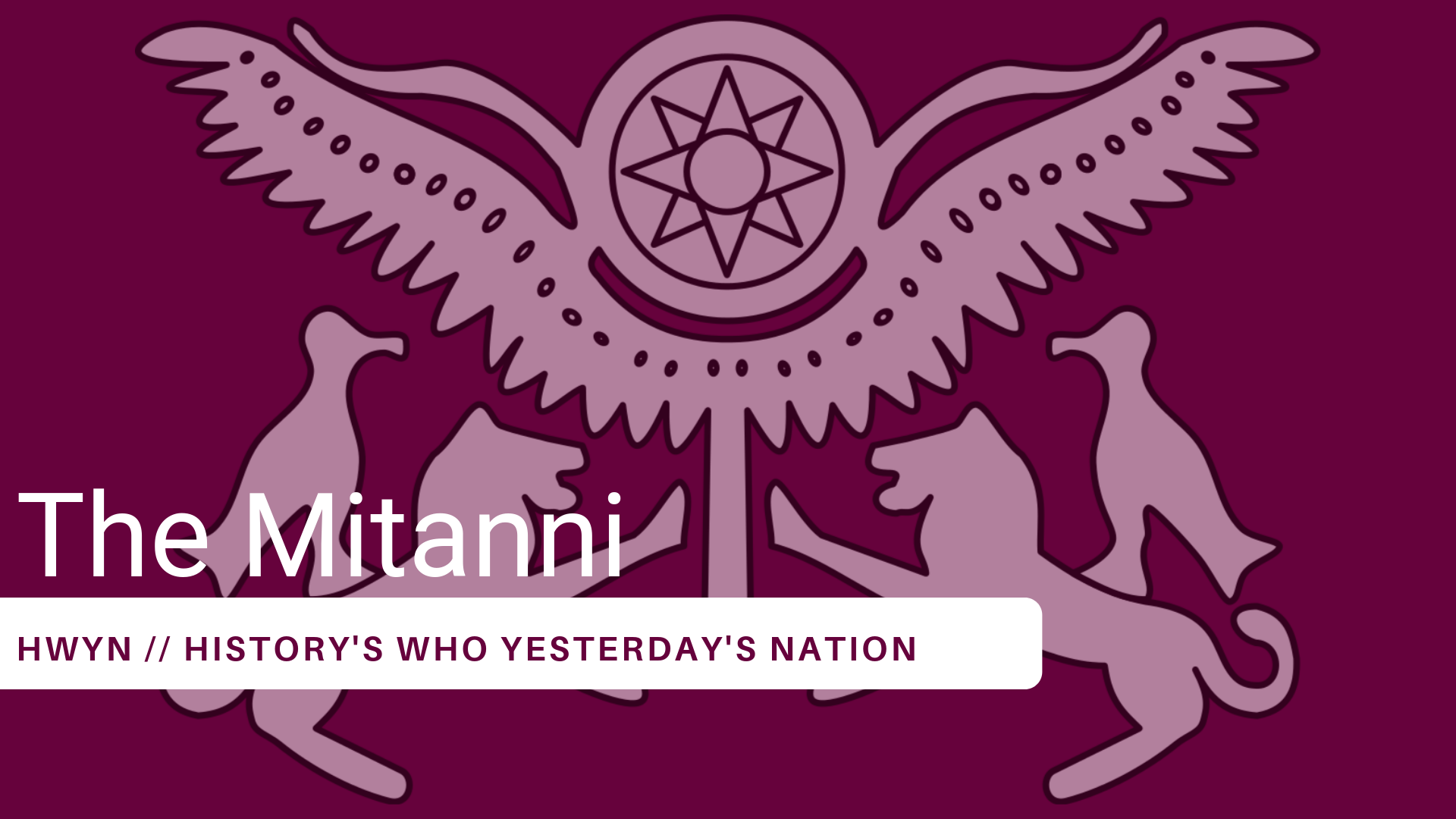 The mound of Megiddo, located in Northern Israel, is said to be the site of the great Battle of Armageddon. While the future war between the Kings of the World receives the most focus, this ancient city has already seen its fair share of blood shed between powerful armies. The Battle of Megiddo occurred in 1918, between allied British forces and the Ottoman Empire, and in 609 BC between the Pharaoh Neco and Josiah, the ruler of the Kingdom of Judea. However, the oldest skirmish happened 3500 years ago between the infamous Thutmose III of Egypt and Canaanite rebels. However, the Mitanni also played a vital role in the Canaanite resistance. Parattarna of Mitanni allied himself with the Canaanite defectors. Included amongst the armies of Kadesh was a force led by 330 Mitanni tribal leaders and thousands of light chariots pulled by their famed horses. Despite they’re important role in Bronze Age history, this incredible civilization was almost lost to the sands of time.

The Mitanni, called by the Egyptians the Naharin, first entered the world stage around 1500 BC. In the decades before, the Hittite King Mursili I conquered the Yamhad rulers in Aleppo and sacked the city of Babylon, damaging the Amorite leadership in Mesopotamia. The weakened state of the nations surrounding the Hurrian lands made it possible for the rise of a new Kingdom. The first in the line of rulers is thought to be Kirta, an Amorite King who travelled to new lands following the death of his family. He was followed by his son Shattarna, and grandson Parattarna, the ruler who helped fight against Egypt in Meggido.

Thutmose III gained a decisive victory, gaining control of the lands of Phoenicia and the Northern Levant. He made multiple attempts to push further into Mitanni territory but failed to gain a lasting conquest in the region. Idrimi of Alalakh had been a young prince during the political turmoil, and his family had fled from danger. The boy spent 7 years among the Habiru, and gained enough support to assist him in returning to the throne of his ancestors. The young man went to Parattarna and reminded him of the alliances between their fathers, and asked to be named ruler of Alalakh. According to their agreement, Idrimi became a vassal of the Mitanni but was given the right to rule the lands of Alalakh, and Amarru. He used his power to expand into territories previously ruled by the Hittites, including Kizzuwatna, a region in Anatolia that would one day be called Cilicia. As a result, the Mitanni began to have massive influence in these newly gained lands, which likely threatened the powerful Hittite rulers.

As their power grew, the Mitanni Kings grew bolder in their interactions with surrounding neighbors. Shaushtatar marched into Assur, the capital of Assyria and stole the golden doors of their palace. He also retook many of the lands in the Orontes valley which had been claimed by Amenhotep II. Egypt attempted to retaliate, but failed to push their army to the banks of the Euphrates.

Relations between the Mitanni and Egyptians softened, thanks to the growing success of their mutual enemy, the Hittites. Shuttarna II was the first to be received in the Egyptian court, where both rulers exchanged luxurious gifts. Shuttarna’s own daughter Gilukhipa was married to Amenhotep III, solidifying the alliance by becoming family. In the Amarna texts, the Mitanni kings routinely call the Pharaoh brother, using the royal marriages to strengthen the alliance between the nations. Artatama’s daughter was then married to Thutmose IV. And, Tadukhipa, the daughter of the Mitanni King Tushratta was also sent to Egypt to wed Amenhotep III. However, soon after her arrival, the Pharaoh died, and she was then married to Akhenaten. Her identity as a foreign princess who was loved by Akhenaten has led many to associate her with either Queen Kiya or even Nefertiti.

However, during the reign of Akhenaten, the letters sent by Tushratta suggest a major falling out. The Mitanni king repeatedly accuses the new Pharaoh of deceiving him, by sending gold plated wooden statues instead of the solid gold figures that Amenhotep had promised him. Akhenaten began receiving dignitaries from the enemies of Mitanni, including both the Assyrian and Hittite kingdoms. However, Egypt itself soon fell into decline, as internal strife between dynasty’s placed the Northern struggles on the backburner. Tushratta’s power was further weakened by the rise of a relative named Artatama II, who declared himself King of Hurri.

The political unrest of the time caused the Amurru ruler Aziru to form a secret alliance with the Hittite King Suppiluliuma. The Hittites then quickly gained control of Amurru and Nuhasse. Suppiluliuma eventually signed a treaty with Artatama, which officially declared that the conquered territories and the region of Mount Lebanon were now Hittite land.

Meanwhile, Tushratta’s son murdered him, and his brother Shattiwaza fled to foreign lands, leaving Artatama and his son Shuttarna in control of all Mitanni. Assyria heard of the upheaval and Ashur Uballit took advantage of the chaos by invading their lands. He placed Artatama and Shuttarna in charge of Mitanni, but were now mostly vassals of the Assyrian empire.

Years later, Shattiwaza, the long lost son of Tushratta travelled to Suppiluliuma, asking for aid to overthrow the existing rulers. To solidify the new alliance, Shattiwaza was married to the Hittite Kings daughter and a formal treaty was signed. The Gods invoked in the signing of the treaty has sparked great interest from historians. It mentions an array of Gods from Semitic and Vedic pantheons including the Storm-god, Anu, Enlil, Mitra, Varuna, Indra, the Nasatya twin horsemen, Ishtar the Evening Star and more.

Piyassili, Suppiluliuma’s son, with Shattiwaza at his side, marched into Mitanni to retake the Kingdom. Shuttarna had asked the Assyrians for assistance, but all that arrived was a small force led by only one chariot. The humiliation was so severe, that the people of Mitanni demanded that Shuttarna be taken off the thrown, and they willingly surrendered to the Hittite forces. After the victory, the treaty gave Shattiwaza control of the central Mitanni territories, but Piyassili was given all the lands which had been conquered by the Hittites in past conflicts. Therefore, the Kingdom of Mitanni was severely reduced, and their leaders became vassals of the Hittite rulers.

In 1295 BC, Adad-nirari ascended the Assyrian throne, and quickly set about making a name for himself.  He claimed to defeat the Kassites of Babylon, the Guteans of the east, the Lullubi and the Shubaru of the North. The Mitanni ruler Wasashatta knew they were the next target, and reached out to the Hittites for help. However, the Hittite were dealing with their own issues at the time, and they’re power had already been diminished. Adad-nirari attacked many important Mitanni cities, and laid total waste to Irridu, going as far as sowing salt over the land. He captured Wasashatta’s children and wife and took them to the Assyrian capital of Ashur.

In 1250, the Mitanni rebelled against Assyria with help from the Hittites and Arameans. Shalmaneser of Assyria was victorious and he punished the soldiers by blinding them. He also enslaved a large portion of the population and deported them to foreign lands.

Around 1200 BC, at the onset of the Bronze Age collapse, war was waged against the Hittites and the invading forces attempted to go further into Mitanni regions. The Assyrians remained successful at keeping them back. By this time, the Mitanni leadership had declined entirely. The area remained occupied by Hurrians, Aramaeans and Kurds through the ages, though ruled by many different nations.

The deeds of the Mitanni may have remained lost to modern scholarship forever, if it hadn’t been for the discovery of multiple texts such as the Armana Letters, the Idrimi statue and the treaty of Suppiluliuma and Shattiwaza. Perhaps more information will continue to be uncovered thanks to the work of archeologists in the region. In 2010, a reservoir near the Mosul Dam in northern Iraq lost a significant amount of water due to drought. It revealed portions of lost ruins but was soon covered again by the return of rains. When it dried out again a few years later, a team of archeologists jumped at the chance to excavate the site. They soon realized that it was the remains of a Mitanni palace, which existed during the 13th and 14th century BC. Many artifacts have been uncovered including well preserved colorfully painted murals and at least ten cuneiform clay tablets. The texts are being translated at the University of Heidelbert, and history fans around the world are waiting eagerly to learn more. Unfortunately, the site has again been submerged beneath the water, and it is uncertain when another opportunity for excavation will arise.

What do you think the newly discovered tablets will reveal about history? Let us know in the comments below. Thank you for watching! Don’t forget to subscribe and click the notification bell so you don’t miss future videos.

0 comments on “The Ancient Mitanni Kingdom”