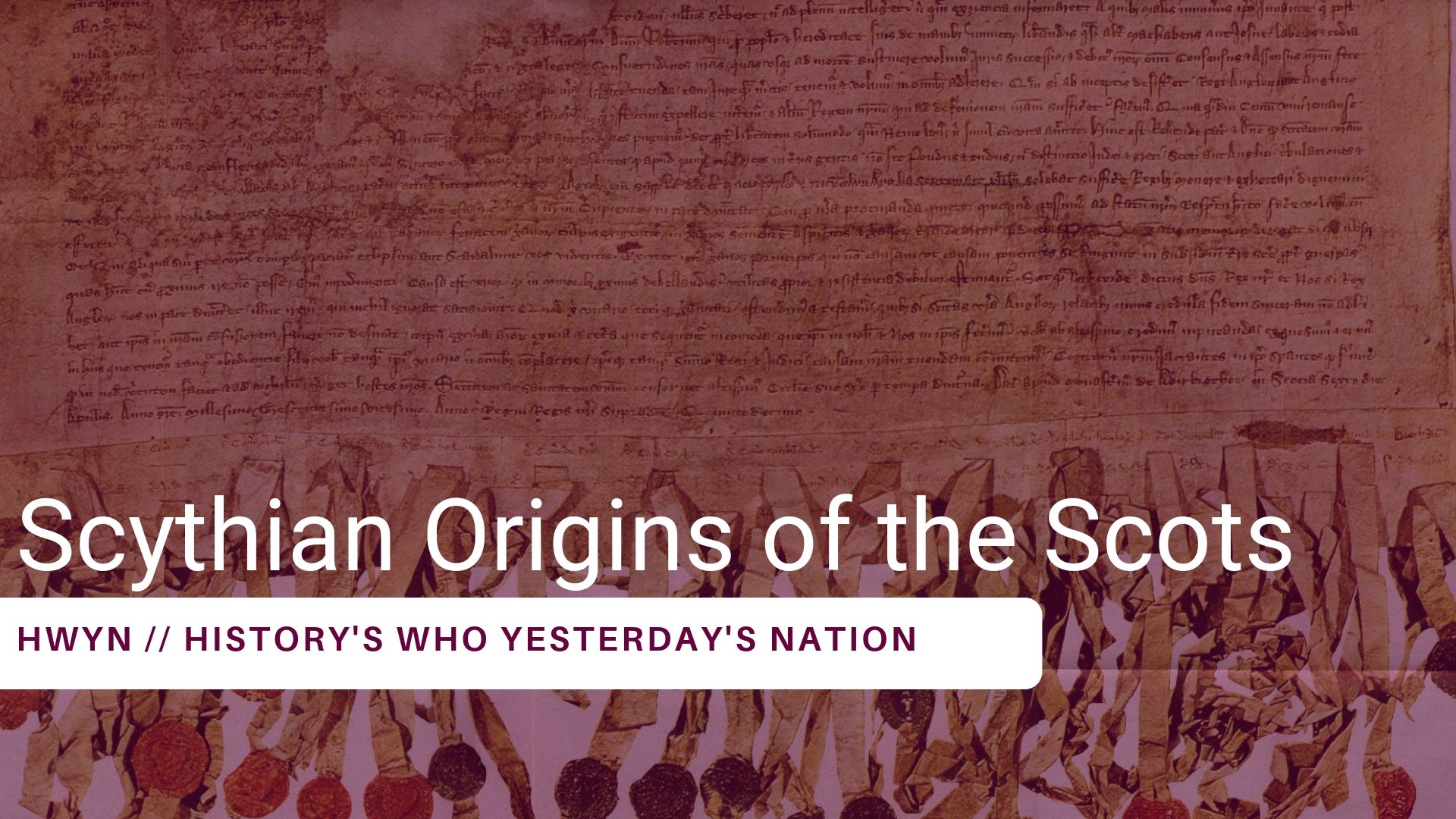 While Scottish history isn’t always at the forefront of modern education curriculums, most of us are familiar with their most infamous rebellion against England. Names like Robert the Bruce and William Wallace have become resurrected in the minds of new generations thanks to popular movies like Braveheart and the Outlaw King. One of the most important historical texts from this time period is the Declaration of Arbroath. This incredible document is one of the first in Western society to demand freedom and sovereignty, and it paved the way for similar declarations in the future, including the one created by the founding fathers of America. The letter was written in 1320 and signed by Robert the Bruce and more than 50 clan leaders and chieftans. The Scotsmen sent the text to Pope John XXII, explaining why they had the natural right to defend their territories against the tyranny of Edward Longshanks of England, known infamously as the Hammer of the Scots. It also served as an effort to explain why they had chosen Robert as their leader, despite his excommunication for the earlier murder of John Comyn, a rival claimant to the throne. The most frequently cited quote is certainly an inspirational one, “For as long as but a hundred of us remain alive, never will we on any conditions be brought under English rule. It is not for glory, nor riches, nor honours that we are fighting, but for freedom – for that alone, which no honest man gives up but with life itself.”

While this line is worthy of remembrance, there is an often-neglected paragraph that is also very interesting, “we know…from the chronicles and books of the ancients…that among other famous nations our own, the Scots, has been graced with widespread renown. They journeyed from Greater Scythia by way of the Tyrrhenian Sea and the Pillars of Hercules and dwelt for a long course of time in Spain…Thence they came, twelve hundred years after the people of Israel crossed the Red Sea, to their home in the west where they still live today.”

Where might they have gotten such a strange idea? There aren’t a lot of historical Irish sources written before the Christian era. Whether this is because existing documents were destroyed, or because the peoples of Ireland and Scotland preferred oral transmission over written text is a subject for a separate discussion. Regardless, there are only a small number of documents still in existence which speak of the early history of the Gaelic peoples of Ireland, Scotland and Wales. The earliest reference we can turn to is the Lebor Gabala Erenn – which translates to “The Book of the Taking of Ireland” or The Book of Invasions.

The author of the Book of Invasions is unknown however it was likely created in the 11th century as a compilation of previously recorded poems and tales, with additional prose inserted throughout. The result is a rich, albeit disjointed, amalgam of ancient Gaelic folklore and legendary Celtic sagas with biblical elements sprinkled in for good measure. Over the centuries the book has been steeped in controversy, as some whole heartedly adopt the myths as historical fact, while others dismiss the work entirely as Christian propaganda. Many modern scholars, historians and literary critics sit somewhere between the two extremes. Regardless of its origins, the book has had a profound impact on the people of Ireland and Scotland and helped to produce deeply rooted beliefs about the history and culture of the Celts and Gaels of Northwestern Europe. Therefore, it is important to continue relaying the tales if we want to preserve the heritage of their descendants who are scattered throughout the world today. I strongly suggest you read the document in its entirety for yourselves, there are links available in the description below.

The story begins with a recount of the biblical creation story. Quickly, it revisits the birth of the light of the angels, the formation of the earth, sky and sea as well as the moon, sun and stars. It tells of the fall of Adam and Eve, the death and exile of their first two sons, and the progeny of Seth, their third born, leading to Noah and the story of the Great Flood.

And, finally Japheth was given the portion of north Asia and Europe, where his sons began to populate the territories encompassing Asia Minor, Armenia, Media and Scythia.  Here, the text goes into further details about the descendants of Japheth, claiming that one of his sons Magog is the progenerator of all the Pre-Gaelic Irish settlers, the Partholonians, Nemedians, Fir Bolg and Tuatha De Danaan.

I hope to cover the interesting tales of these first Irish settlers in later videos, however, for this topic, we’re going to focus on the final group to reach its shores, since this is the story which inspired the retelling of the legend in the Declaration of Arboath.

The Gaels, also known as the Milesians, were the final party to settle in Ireland and Scotland. They are said to be the primary ancestors of the Irish and Scottish people. Their particular lineage comes from another of Japhets descendants, Gomer. According to the Book of Invasions, their eldest direct ancestor was Feinius Farseid, a Scythian prince. Legend states that he was one of the chieftans present during the building of the Tower of Nimrod and had two sons, one named Nenual who inherited the Scythian kingdom of his father, and Neil who was born in Mesopotamia during the confusion of languages. In time, Ninus had taken the throne of Assyria, and began to subjugate nearby kingdoms. A descendant of Neil, Gaedel Glas had become an expert at languages and writing, so much so that the Pharaoh of Egypt invited him to marry his daughter and presented him with land near the Red Sea. The royal wife of Gaedel became known as Scota, and from them are descended the Gaelic and Scottish people. Two generations later, when the Israelites left Egypt during the Exodus, their grandson Sru also fled with his people. Sru took four ships with twenty-four couples and set sail with his son Eber back to Scythia where they fought the existing rulers for land. For several generations control of the kingdom went back and forth between the two warring families until finally Sru’s descendant Agnomain and his son Lamfhind were driven out. They sailed on the sea for seven years, during which Agnomain met his end. By the time they reached the shores of the Caspian Sea, they held three ships among them, captained by Lamfhind, Allot and a druid named Caicher. When they reached the Rhiphaean Mountains, Caicher had a premonition that a promised land would be given to the Gaedil people, but it would take three hundred years for their children to reach the plentiful Isle. They settled in the Macotic Marshes. The group remained in the area for eight more generations. Lamfhind’s descendent Brath led his people out of the marshy territory and into the Tyrrhean Sea, where they traveled to Crete, then Sicily and finally to Spain.

. Though they were victorious in their military campaigns, the group fell ill with a plague and most of their numbers perished soon after. Brath’s son Breogan was one of the survivors, and he built a city named Brigantia, with an enormously tall tower at the edge of the Western sea.

It was from there that Breogan’s son Ith finally caught a glimpse of their promised home, foreseen by Cochair the druid so many years ago. Ith set sail to the land peaking above the horizon with a small group of men. When he landed, he met with three kings of the Tuatha De Danaan, Mac Cuill, Mac Cecht and Mac Greine. The rulers had been fighting amongst themselves over territorial rights, and during an assembly, Ith explained how there was so much abundant land available, there was no need to quarrel over it. The three men’s anger quickly turned toward the foreigner, as they suspected his statement was admission that he wanted their lands for himself. Ith was murdered by the kings and his men returned to Spain to tell the tale to their brethren. Mil Espaine and his sons pledged to defend the honor of their fallen brother and collected an army to fight the Tuatha De themselves. Eremon, Eber Finn and Amergin led the charge, but the Tuatha De had a few tricks up their sleeves. The famed sorcerers put a cloaking spell on the island, so that the Milesians would be forced to sail around in circles, never landing on its shores. The team sailed three times around Ireland without seeing land, until they reached a safe place to land away from the island. There, the men met three Queens, Banba, Fodla and Eriu. They promised to aid them in their endeavor if they promised to name the lands they inherited after them. Once they agreed, the women told them how their arrival had been long prophesied and gave them their blessing.

With the Queens approval, the army marched toward the hill of Tara, where the Kings were waiting. They demanded to be given either war, kingship or judgement from the rulers, to which the Kings told them to sail beyond the nine waves while they made their choice. As soon as they left, the druids cast another spell, creating a huge storm that made sailing back to the island impossible. Amergin sang to the land, invoking the spirit of Ireland, which immediately calmed the waters. One of their ships had perished, but the others arrived on land by nightfall, at the shores of West Munster.

The two groups fought vigorously, with both sides suffering significant casualties. Eventually, the three kings and their wives were killed in battle, and the Tuathe De Danaan were expelled from the lands. From then on Ireland was divided between Eremon who ruled in the North and Eber Finn who held the crown in the South, and it was from these men that their descendants spread throughout the islands before the later arrival of the Romans and Saxons.

Or so the story goes. While the Book of Invasions does seem to be an interesting mixture of fact and fiction, many have begun to dismiss it as purely fantasy. However, might there be some truth to the myth of the Milesians?