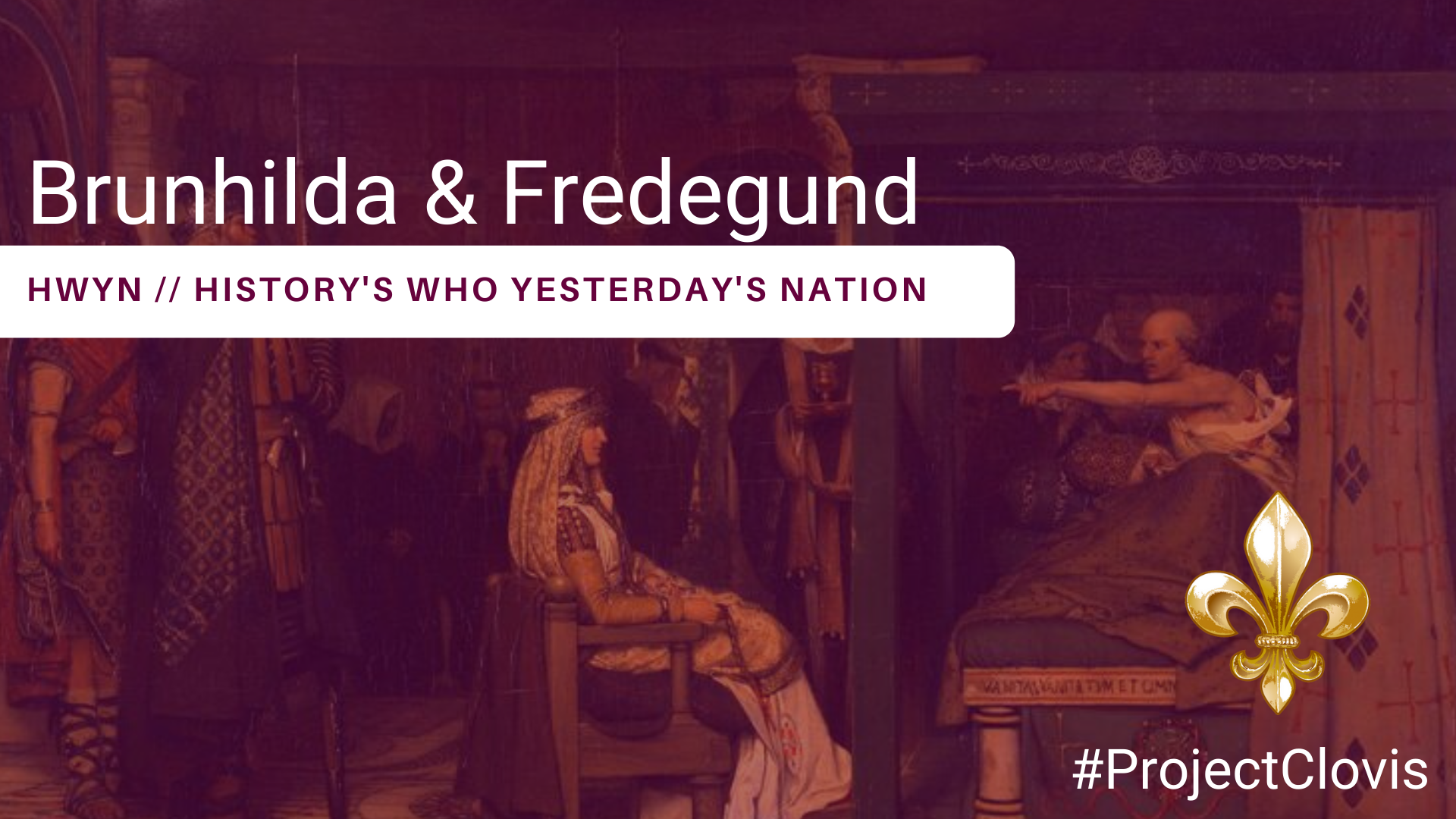 Note: This video is part of Project Clovis, a collaboration with several other YouTube history channels. If you’re interested in learning more about the Merovingian Dynasty, check out the Playlist – https://www.youtube.com/playlist?list=PL5Ag9n-o0IZDEqR6WIimt6T4OlMC7AYjU

Because Salic Law has been used throughout European history to deny succession and inheritance to royal women, the Merovingian period has often been viewed as an era where Queens had little political power. While it’s true that the lives of many princesses, queens and concubines of the early medieval Frankish kingdom have been lost to recorded history, some used the opportunities available to them, quickly achieving their ambitions through the influence exerted on the Kings of the era. Certainly, the two strongest examples of such women are Fredegund and Brunhilda, rivals whose outrageous feud almost put an end to the entire dynasty.

Following the death of Clothar I in 561, the Kingdom of the Franks was divided amongst four of his sons. The political landscape that both Fredegund and Brunhilda were brought into upon their marriages was already one of great instability. Clothar had narrowly escaped wars with his own brothers, and the tensions of the current generation ran high. Though the rulers were Christian, they believed that polygamy was an acceptable practice by those of royal lineage, and so often had multiple wives and mistresses. Therefore, a woman had little chance of holding power in her hands for long, as she could be easily dismissed according to the whims and impulses of their lovers. Many of the Kings ex-partners found themselves, and their children, left destitute and several more spent the better part of their adult lives forced into a nun’s habit. Despite their inability to rule from the throne themselves, women who came into their relationships with a large dowry and morning gift had access to vast amounts of personal wealth and land, which could be used to gain favor from the powerful forces around them. The two Merovingian Queens realized early on that their survival, and the legitimacy of their sons, depended on their ability to manipulate the opinions of their husbands, church leaders and the noble elite which held land and influence within the four neighboring kingdoms. And survive they did, frequently at the expense of those around them.

Their story begins when one of the reigning brothers Sigibert chose to renounce the common Princely practice of marrying low born women. While his brothers were contented with bedding all who caught their fancy, Sigibert sought a bride from Visigothic royalty. Brunhilda was the daughter of Athanagild, the King of Hispania and Septimania. Her early years were spent at the Visigoth capital of Toledo, where she had been well educated. Her pious reputation and beauty made her very popular among royal circles, and their marriage also brought an alliance with one of the most powerful kingdoms of the time. Not to be outshined, or out maneuvered, Sigibert’s brother Chilperic took Brunhilda’s sister Galswintha for his own bride. However, after the marriage became official, Galswintha was dissatisfied with the actions of her new husband and attempted to remove his other lovers from the palace. Her efforts were a direct threat to the King and the other women at court, and as a result, was found murdered in her bed. While the perpetrator was likely a paid assassin, many assumed that the King was behind the plot. Chilperic’s previous wife Fredegund soon re-emerged as the regent’s favorite, which caused Brunhilda to suspect that both parties were responsible for the death of her sister.

The event put Sigibert in a very precarious position, as the death of Galswintha put his new relationship with the Visigoths at stake and enraged his wife. The eldest brother, Guntram of Burgundy, stepped in to keep the peace between his siblings. Galswintha had been given five large territories during marriage negotiations, and Guntram convinced Chilperic to hand over these lands to Brunhilda as restitutions for his crime. While this provided a momentary cease fire, resentment continued to build between the two couples. In 573, Chilperic invaded Sigibert’s kingdom, and was driven back. He fled to Tournai, and as King Sigibert followed in pursuit, he was overtaken by assassins who slew him with poisonous daggers. The newly widowed Brunhilda was taken to Rouen.

During her exile, she was visited by Merovech, a son of Chilperic whose mother Audovera had been cast aside for Fredegund. The two young royals now had a common enemy, and they solidified their newly formed alliance with marriage. Though the ceremony had been performed by the Bishop of Rouen himself, Chilperic claimed that their union went against church doctrine because Brunhilda was technically Merovech’s aunt. This was used as a pretext for capturing his rebellious son. He had the prince tonsured according to the custom of Christian monks, thereby removing his long hair, a central characteristic of the Priest King rulers of the Franks. Following this humiliation, his father took him to a monastery in Le Mans where he was handed over to the Priests for service in the church. A fate that was nearly identical to his mother’s. He quickly escaped but failed to gain support for his cause and, according to Gregory of Tours, asked one of his servants to put him out of his misery.

One might think that the death of both Merovech and Sigibert would have been the end of Brunhilda’s grasp on power, but it was only the beginning of round three. Guntram of Burgundy feared that Chilperic would make use of the power vacuum and take over the remnants of their departed brother’s kingdom. Thereby giving him two of the four Merovingian domains. In 577, King Guntram swore to protect Brunhilda and his nephew, and allowed her to rule Sigibert’s territories as Queen regent. To further establish her legitimacy and influence on international affairs, she arranged the marriage of her daughters to the prince Hermenegild, who soon after became King of Seville and the first Visigothic monarch to leave the Arian Christian church of his ancestors and embrace Catholicism.

Despite her best efforts, the new acquired stability was short lived as Hermenegild’s conversion was viewed as a threat to his father’s Kingdom. King Leovigild marched into Merida and captured his son. Brunhilda’s daughter Ingund fled with her son to the Byzantine territories of Spain. Their leaders protected her from the wrath of Leovigild by refusing to turn her over to him. Yet, they also refused to let her leave their kingdom for any other purpose, using her for leverage to coerce her brother Childebert into marching against the Lombards. While the Queen and Prince were being taken to Constantinople, Ingund died. It is unknown if she was murdered, or if she became ill. Either way, this created major issues between the Visigoths and Guntram. Fearful of war, the King of Spain reached out to Fredegund, asking to form an alliance through the marriage of his other son Reccared and Chilperic’s daughter Regunth. There were also letters exchanged between the two, discussing an assassination plot against Guntram, Childebert and Brunhilda. During this tumultuous time, Chilperic suspiciously died as well, placing Fredegund in the highest position as Queen Regent. She quickly got to work forming a plan to murder Childebert by working with three disgruntled nobles who wanted to dethrone their young King. Their deceit was soon uncovered however, and while the life of Fredegund was spared, her co-conspirators were swiftly executed. In response, King Guntram agreed to name Childebert as the sole successor of Burgundy.

Upon Guntram’s death in 592, Childebert reigned over the territories of both Burgundy and Austrasia, thus controlling half of the entire Frankish kingdom. The King had little time to prepare for war against his rivals because both Childebert and his wife were poisoned three years later, likely at the behest of Fredegund and her son Clothar II. When he died, Burgundy and Austrasia were once again divided into separate kingdoms, with each territory going to Childebert’s two sons. Fredegund succumbed to death as well in 597.

Even though she was now safe from the danger of her lifelong enemy, Brunhilda continued to insert herself into the political affairs of her grandsons. Theudebert refused to allow her to rule from behind the scenes and asserted his sovereignty by exiling her from his lands. His brother, Theuderic of Burgundy accepted her into his household, perhaps naïve of the inevitable consequences. Now, the wrathful Queen’s vengeance was directed at Theudebert. She quickly developed a romantic relationship with the noble Protadius, maneuvering him into the coveted role of Mayor of the Palace, hoping to push the two kingdoms into war. Theuderic’s soldiers refused to fight on the battlefield for the satisfaction of Brunhilda and executed her lover. She eventually achieved her goal nonetheless in 612 when the Austrasian ruler was captured and sent to a monastery. A year later, Theuderic was buried, following a supposed case of dysentery and Brunhilda was once again provided with an opportunity to rule through a fresh monarch, this time her great-grandson Sigibert II. Clothar hastily took his chance to invade and cooperated with the Mayor of the Palace in Burgundy who also wanted to rid himself of the two royals. The twelve year old king and younger brother were slain while fleeing their great uncle, and the 70 year old Queen was captured. Chlothar devised a brutal execution, tying each limb to four wild horses, and drawn through the public streets for hours. It seems that though Brunhilda waged many battles in her 16 extra years of life, it was her foe Fredegund who ultimately won the war.

0 comments on “Brunhilda & Fredegund – The Feud Between Two Merovingian Queens”